3 of the coolest flexible workspaces in Berlin 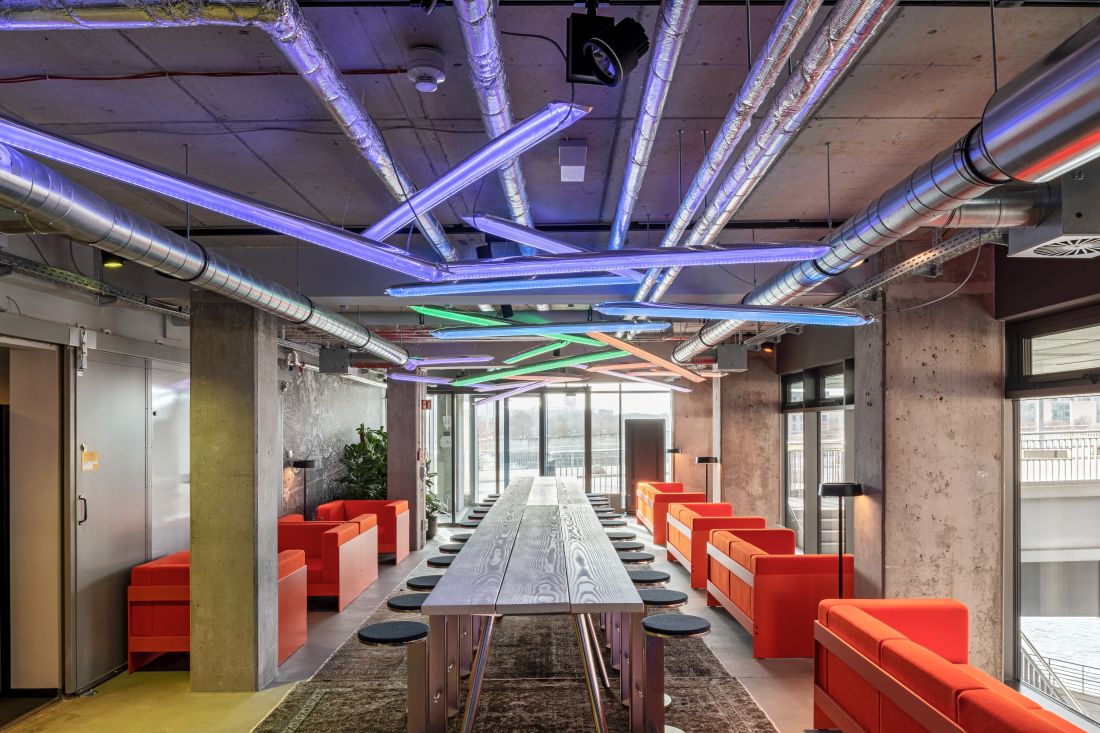 Berlin has gained a reputation in recent years as the cool capital of Europe, attracting floods of tourists from all over the world. It's a city that has been shaped by a traumatic history, but also its ability to bounce back better than ever.

Nowadays, Berliners are known for their free-spirited nature and internationalism, which perhaps explains why the city has such a vibrant coworking scene that attracts freelancers, entrepreneurs and all manner of workers. We've compiled a list of three of our favourite flexible work spaces that you'll find in the German capital. Just read to the end for more details of how to book.


For minimalists: ABC Friedrichstaße - from €5

ABC specialise in creating simple, central flexible work spaces so you can focus on what matters - and their Friedrichstaße work space certainly delivers. Situated in "arguably the best location Berlin has to offer" in their own words, this office is minimally designed with plenty of natural light to boost your mood and productivity. Access a mixture of space, including coworking desks, conference rooms and even a virtual office for those on a tighter budget.

This trendy suburb is usually known for its high real estate prices, thanks to being a major culture and retail hub. But with NearU you can book a flexible desk for as little as €5 per person - sounds like a sweet deal if you ask us.

Grab a coffee at Cafe Haferkater

And what would Berlin be without its cafe culture? Just a stone's throw from ABC Friedrichstraße you'll find Cafe Haferkater, one of the most stylish coffee shops this area has to offer. Help yourself to top quality coffee and a range of sweet and savoury treats on your lunch break or your way into the office.

Coffee in Germany is so much more than just a drink - it's an important national ritual. Kaffeeklatsch, literally translating to coffee chatter, has historically been a time of day (usually in the afternoon) for Germans to come together to share coffee and conversation with friends, family, and colleagues. The concept actually originated in the 17th and 18th centuries amongst the German upper-class, primarily as a way for high-born ladies to gossip in a non-alcoholic environment (as bars and cigar clubs were reserved for men). In modern times it's all about personal interaction and boosting socialisation, something that we're big advocates of here at NearU.


For creatives: Design Offices Humboldthafen - from €5

If you're looking for a flexible work space that encapsulates Berlin's trendy hipster scene, Design Offices Humboldthafen could be the location for you. This impressive space set over 5,000 square metres combines industrial interiors with homely wooden furnishings to create an attractive working environment. They also offer a variety of space, including a conference podium set beneath their awesome coworking balcony.

And the outside view is just as impressive as inside. Design Offices sits just on the waterfront of the Spree, Berlin's renowned river, which passes some of the city's most famous sites including the Reichstag building, Berlin Cathedral, and Schloss Charlottenburg.

If you're looking to cross a bit of sight-seeing off your Berlin to-do list, visiting the Reichstag is a rite of passage. Constructed in the late 19th century, this dramatic building is a standing symbol of Germany's turbulent political history, but it's also an astonishing piece of architecture. Now though, it houses the contemporary German parliament, also known as the Bundestag.


For nature-lovers: ABC Central Station - from €5

Nestled at the heart of one of the greener areas of Berlin you'll find ABC Central Station. The second ABC location on our list, this flexible work space abides by the same principles of minimalism. The floor to ceiling windows in the main shared working area allow for plenty of natural light, an abundance of which never fails to enhance productivity and workplace wellbeing. It's also a perfect location for anyone working in politics or the civil service, being situated in the city's Govenment District.

This building has also been constructed with sustainability in mind, so will surely satisfy the more environmentally conscious worker.

Take a walk in Tiergarten

And what better place to grab some fresh air than Tiergarten, Berlin's most popular inner-city park? There's no better time for a visit than autumn, as the changing season creates a beautiful setting for a walk, and it's just across the river from ABC Central Station. In fact, an autumnal stroll could actually help with productivity in the office - a 2018 study published in 'Frontiers of Psychology' found that orange had an energising effect on participants that made it easier to engage with difficult, focussed tasks.

Like the look of these spaces? You can book into them instantly with NearU - simply download our app from the App Store or Google Play and search, book, work. If you're looking for a flexible work space in warmer climes, why not check out our guide to flexible working in Barcelona here?

Haven't heard of us? NearU has launched an app that connects employees to flexible desk space and meeting rooms, putting flexible working at your fingertips. Traditional office working is a thing of the past and working-from-home has a high impact on our mental health - NearU's pay-as-you-go booking platform lets you choose to work-near-home when you want, eliminating the need for a commute, expensive office rental contracts, and giving you the freedom to do what works for you.