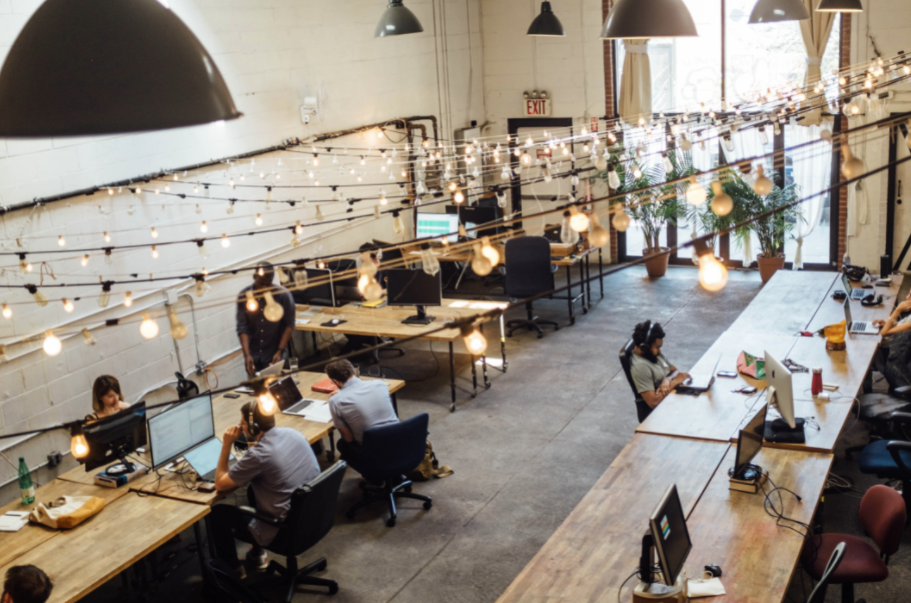 Rather unfairly, 'coworking' has gained a bit of a bad reputation in recent years. This is partly down to the media stereotypes of your average free-spirited co-worker (which largely doesn't hold up in real life); as well certain coworking companies falling from grace in a very public fashion. But coworking is getting a rebrand to suit its place in the post-pandemic future of work. More companies are coming round to the many benefits that offering a 'third workplace' option can provide. So there's no need to write coworking off simply due to its reputation.

For those of us outside the United States where coworking has become synonymous with in-your-face Silicon Valley or New York City entrepreneurship, the term might not be wholly familiar. Essentially, coworking is an arrangement where employees from multiple different companies share one large office space. Usually this space will be licensed by a third-party and come with wifi, furnishings and other utilities included, which is why it is often preferred as a cheaper alternative to permanent office space.

While it really took off in the mid-2000s to early 2010s, coworking takes its inspiration from the European hacker spaces of the 1990s. These were shared environments where programmers and others in the tech industry could come together to share skills and tricks before knowledge-sharing was made easier via the internet.

How did it get a bad reputation?

It's hard to find fault in the concept of coworking - its key principles are education and community, which we can all agree are pretty positive. But most people became aware of the movement due to WeWork's dramatic rise and fall in the 2010s. The company, which was founded in 2010 by Adam Neumann, was initially praised as a 'unicorn' gaining investment from the likes of J.P. Morgan Chase & Co, Goldman Sachs and the Harvard Corporation, going on to be valued at $10 billion in 2016.

However, things started to go wrong in 2019 after the company publicly filed for an IPO in August. Soon after, Neumann voted to remove himself from the position of CEO, giving up most of his stock and relinquishing control to SoftBank. The company's valuation dropped by more than half. In short, they lost a lot of money.

Many have put this fall from grace down to being overly ambitious. Its original business model had planned to expand into cohabitation spaces, "WeSleep", as well as a more wacky shared boating venture, "WeSail". Neumann had also been previously exposed by the Wall Street Journal for selling stock and leasing buildings that he hadn't the rights to, which only added further fuel to the fire. But while the company reported losses of $2.1 billion in 2021 ( worsened by the COVID-19 pandemic), it still exists to date. Unfortunately, the whole industry has had to live under the umbrella of doubt cast overhead by Neumann's questionable practices.

Nowadays, things are looking up. After a year of nothing but work-from-home in the headlines, employers and employees alike are starting to unravel the negatives of completely home-based working. Mental health took a huge hit due to a lack of face-to-face interaction; but it's clear a full return to pre-pandemic office working won't be happening either. Many eyes have thus been opened up to local coworking spaces.

It's flexible
Coworking spaces are known for their flexibility. Workers are able to come and go as they please once they've paid for a pass to a particular space. Given that most companies are rolling out flexible working policies that will allow staff to choose where they work best, local coworking spaces are likely to become a popular alternative to working from home or commuting into the main office every day.

It's diverse
Another one of the key draws for coworking has always been the diversity of people you can meet there. With people from multiple companies sharing one space, this provides ample opportunity for networking, knowledge-sharing, and generally meeting new people. Not only is this great for boosting creativity and inspiring your staff, it also presents a way to potentially land new clients or partners.

It's cheap
Aside from the cash you'll save on coffee (as most spaces have kitchen facilities included), coworking can be relatively cheap as an option to offer staff or even to take up on an individual basis. Some companies may even abandon the traditional head office in favour of having smaller, short-term spokes in coworking spaces, which could have a significant impact on real estate costs, potentially saving firms up to 40% over three to five years.