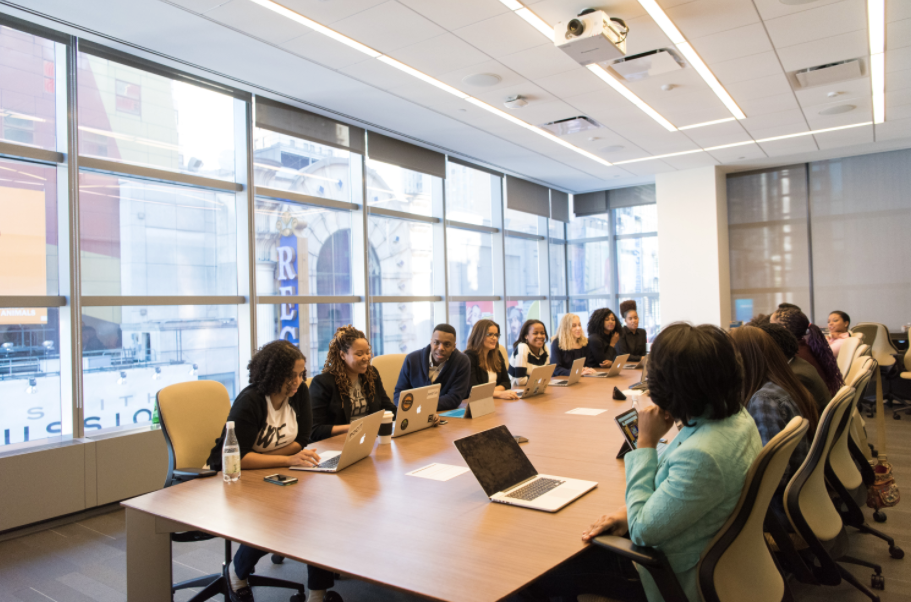 It might seem rather counterintuitive to begin an article all about the benefits that hybrid working could provide in terms of staff diversity with a warning, however it's an important factor to note. More than half of managers, according to Lancaster University, expect increased remote working to exacerbate pre-existing office inequalities.
Before the pandemic, workers from lower-socioeconomic backgrounds, ethnic minorities, women, and workers with disabilities (both physical and cognitive) were less likely to benefit from the in-person networking, mentoring, and shadowing opportunities that the office provided. While the normalisation of remote work has made the logistics of work easier for these groups, the danger as the world opens partially back up is that while these workers will expect to retain the flexibility of pandemic working, those white, male, non-disabled employees will head back into the office more regularly for in-person face time. Now, we've already written on why proximity bias is a bad thing in terms of off-site productivity, but the effect improperly thought out hybrid working policies could have on diversity is even more concerning.

Never fear though - if you've read this far you'll know that the key to hybrid work is employee choice. As long as you put the needs of your workers first, prioritising those diverse groups, your company (and your staff) will be able to reap the many rewards we've already touched upon.

The importance of a diverse workforce cannot be over-stated

Diversity isn't just a box-tick requirement that many companies often mistake it as - having a diverse workforce is actually better for business. According to a 2015 study by Josh Bersin, companies with diverse workforces are 1.7 times more likely to be leaders in innovation. A further study in 2017 by Boston Consulting Group found that they also make 19% more revenue than their non-diverse counterparts. This success can be put down to the unique perspectives that bringing people from different backgrounds together provides.

"Diversity is not just a metric to be strived for, it is actually an integral part of a successful revenue generating business," said Anna Powers, a scientist and advisor commenting on the results of BCG's 2017 research. "Of course, this makes sense because diversity means diversity of minds, ideas, and approaches — which allows teams to find a solution that takes into account multiple angles of the problem, thus making the solution stronger, well rounded and optimized. Therefore, diversity is key for a company's bottom line.” So, the importance of diversity can never be overstated.

What's this got to do with hybrid working?

Conversations about hybrid working have stretched to long before the pandemic - multiple lockdowns simply triggered a change that was already bound to happen. Many workers have enjoyed the increased flexibility of a hybrid model; but for those from diverse groups, it has been a lifeline. Here’s exactly how they’ve benefitted from new choice-driven working trends, and what you can do to ensure these positives aren’t lost in a post-pandemic future.

Disability employment rates for 2020 were at an extreme low of 53.7% (compared to 82% for non-disabled people) which isn’t atypical of their usual levels, even pre-pandemic. But as the world closed down, disabled people found themselves opened up to a whole host of opportunities, working and otherwise, that were previously inaccessible.
“At the start of the first lockdown… society was opening up to millions of disabled and chronically ill people as “virtual living” became the norm – from Zoom job interviews and streamed gigs and theatre to NHS phone appointments,” wrote Frances Ryan, a columnist who writes on disability and social policy amongst other topics, in The Guardian.
The outlook was similar for neuro-diverse people too. In fact, even before the pandemic the mass-unemployment of capable neuro-diverse adults was a plague in itself. A 2019 survey of 2,000 autistic adults by the UK's National Autistic Society found that just 16% of participants were in full time work, despite 77% saying they wanted to work. Barriers included worries about socialisation, noise and over-stimulating office environments, which Oxford University research has shown to induce large amounts of stress in workers with intellectual disabilities. The opportunity of remote work thus mobilised a workforce that had previously been swept under the rug.

But despite the temporary shift, for some employers it has been just that - temporary. In that same Guardian article, one research scientist with chronic pain from endometriosis and IBS explained that, although she was able to work better at home, her boss had already stopped allowing her to work remotely. Implementing hybrid policies based around what disabled and neuro-diverse employees need is vital in order to stop such situations from happening - that way, employers can tap into a largely forgotten, but hugely promising, workforce.

Often saddled with the majority of childcare and household responsibilities, women workers face systemic disadvantages that their male counterparts do not. Flexibility has long been high on the list of hypothetical wants from female employees, particularly parents, and for the first time thanks to the pandemic it has become an actual possibility. “My boss has been really generous... we can work at home or come into the office any day we want," accountant and working mother, Emily, told the Telegraph.

But simply providing flexibility is not enough to ensure gender dynamics stay balanced. In the same article, Emily went on to document the struggles of still being the 'default parent'. “The very first day I got dressed up and my husband suddenly announced that he had to go in because an emergency all-team meeting had been called. Then, because I missed that day, my boss suggested I caught up on a day I hadn’t planned for – when my husband was at work – so I was frantically begging for childcare and completely stressed out.” Unfortunately, Emily's situation isn't unique - imbalanced home dynamics could potentially exacerbate pre-existing office gender divides, as there is a worry that men will take advantage of the physical office while women will spend more time at home.

Equal access to offices and third workspaces will thus remain vital when crafting any hybrid working policy. This was the solution proposed by Emily at least; “we do need to use the offices at least some of the time; if we don’t, they’ll shut them all down and we’ll never get them back,” she said as a closing statement. Hybrid working presents an opportunity to provide women workers with that long-desired flexibility, whilst also ensuring they retain the benefits of having a physical escape from the home when it works for them.

The rise of suburban centres and the mass exodus from expensive city centres has opened job searches up beyond geographical limitations for many for the first time. Previously, it would have been unfathomable to live in a different city, or even country, to most of your coworkers, except maybe if you were a developer whose work has always depended solely on a reliable internet connection. Such a shift is one of the reasons hybrid working has been favoured by those of a lower socio-economic status.

According to a survey of 1,000 people by business advisory firm, BDO, agile work models that allow for a mixture of office-based and remote-working were preferred by younger people considered to be from disadvantaged backgrounds, with more than a third stating that they believed it would give them a better work-life balance. A key deciding factor was the ability to save money thanks to decreased dependency on commuting or the need to rent in expensive areas (where better paying jobs tend to be). Of course, as long as equal access to technology and workspaces are provided, hybrid working could lead to a tangible improvement in social mobility that would never have been allowed under pre-pandemic conditions.

A 2021 survey by Future Forum, in partnership with Slack, found that 97% of Black knowledge workers wanted their companies to embrace a remote or hybrid model post-pandemic. While these findings take an American sampling, they should not be sniffed at by non-US firms. Black and minority ethnic workers reported fewer instances of microaggressions and discrimination, as flexible working reduced the need for them to ‘code-switch’. Even more promisingly, Future Forum predicted that a wider adoption of hybrid working policies would lead to:

The freedom of not having to go into the office has been nothing short of a lifeline for Black employees. One Washington Post article told the story of Mary Smith, a Black project manager living in Texas. Before the pandemic, she would put extra effort into her hair, clothing, and demeanour so as to not appear overtly Black and risk ignorant comments from co-workers - remote working meant she could simply focus on doing her job. After her employer told her to return to work, she quit; “I was very strongly against that,” she told the Washington Post. Historical coworking trends amongst Black and minority ethnic communities have also re-emerged, giving employees networking opportunities in predominantly non-white spaces that they would not have been afforded in the white workplace.
Hybrid working with access to ‘third workplaces’ could thus be the most preferential option when designing a diverse flexible policy. A survey by People Like Us found that Black and minority ethnic professionals were twice as likely to be working from their bedroom without a proper desk during the pandemic. So while more freedom in where they work is a must for Black employees, ensuring equal technological and practical access should be a high priority from a DE&I standpoint.