3 of the trendiest flexible workspaces in Krakow 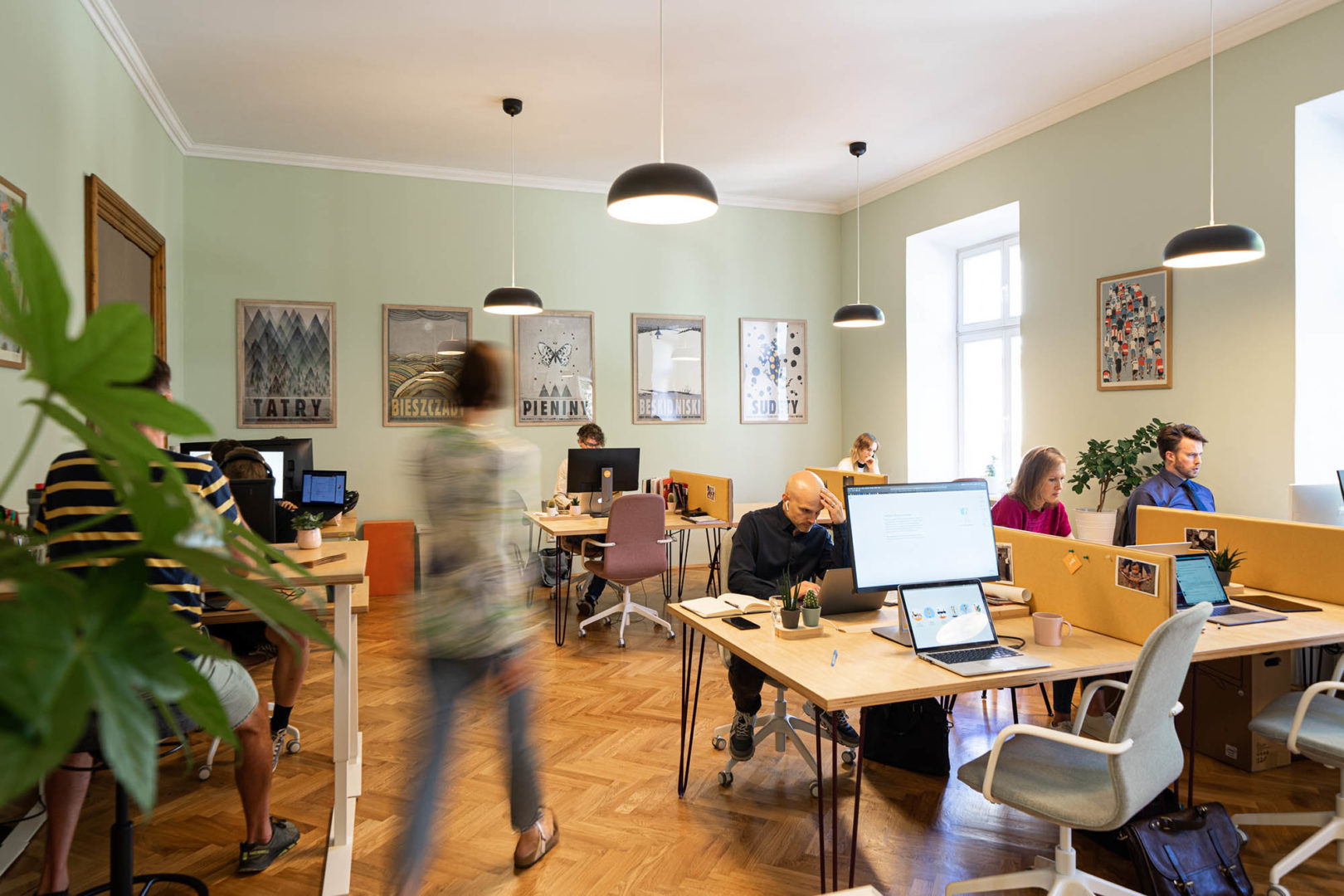 Home to the second-oldest university in Central Europe (founded in 1364), it's no surprise that the people of Krakow are hungry for knowledge. That's just one explanation for the city's vibrant coworking scene, providing both local and international workers the chance to knowledge-share and up-skill as much as they like. We've compiled a list of three of the trendiest spaces this exciting city has to offer, available to book now via NearU. Just read to the end for more details.

This attractive flexible workspace located in the heart of Krakow is more than just an office. While it's equipped with all of the amenities you might expect, such as fast wifi, a kitchen and cafe space, plus a mix of private and shared desks, it's the bustling community that makes Yolk special.

With more than half of their members coming from abroad, Yolk is a great space for networking, skill-sharing, and generally socialising out of your typical comfort zone. While the general spoken language is English, you might also use Yolk as a space for practicing a new language. Did you know, being multi-lingual makes you more employable? Not only does it show that you have the ability to communicate with more people, learning another language makes you more creative and better at multi-tasking. So, all the more reason to book into this international hub.

Take in some history at Wawel Royal Castle

While you're in the area, why not wander over to Wawel Royal Castle. For centuries, this impressive structure at the centre of Krakow played home to generations of Polish Kings and state leaders. Nowadays though, you'll find it contains more royal portraits than actual Royals, as it was converted into an art museum in 1930. There's no flat admission fee, rather visitors can pay to see specific exhibitions. You'll find a diverse selection of displays, including the largest collection of Ottoman tents in Europe, as well as a healthy dose of paintings, tapestries and ceramics all year round.


For night-owls: Archeion - from 39zł pp

This stunning central space is the perfect location to book into if you're wanting to impress a big client. Light meeting rooms and coworking areas are renovated in a classical-meets-modern style, perfectly blending period features with sleek white office furnishings and ergonomic chairs. Meeting rooms are also well-equipped with whiteboards, making it easier than ever to host a brainstorm session or even a small conference.

Also, you might especially like this space if you're a night-owl as they stay open till 9pm. While a large portion of the world's population fall under the night-owl category (a.k.a. people who are more productive later in the day), the traditional 9-to-5 culture of working has unfairly led employers to label them as lazy workers.

But as the tide shifts to more flexible working where people are given more freedom to choose a work schedule and environment that suits them, night-owls are beginning to reclaim their good name. In fact, there's even research to suggest that people who work better at night are actually more intelligent and more productive overall than your standard day-worker.

Try some traditional Polish cuisine at Restauracya Jarema
If you find yourself working on an empty stomach, head over to Restauracya Jarema, only a few minutes walk from Archeion, for some traditional Polish grub. Help yourself to a of feast of Old Polish duck fillet, a hearty bowl of Borsch (beetroot soup), and a platter of Pierogi (dumplings with a variety of fillings), plus many more dishes on their classic menu.

Just outside the city centre find the stylish Mogilska Cowork, a huge space with a fantastic mix of meeting rooms, coworking space, private phone booths, and casual lounging areas. Expect all the basic necessities of super fast wifi, central heating, and access to printing/scanning equipment, as well as a healthy serving of free tea and coffee available to all workers.

They even have an outdoor terrace for when you want to grab some fresh air. We're big believers in getting outside during your working day here at NearU, which is why we love to sing and shout about workspaces with outdoor space. While it may seem a little wacky, it's becoming more and more commonplace due to the positive effects fresh air can have on not only your mental but also your physical health. Some people are even building offices in their gardens; though when you can easily access a space already equipped with a terrace through NearU, there's really no need.

Have a night at the opera at Krakow Opera House

It's been a long hard day, so why not wind down by putting your feet up to watch a nice bit of... opera? Well, there are probably policies against actually putting your feet up in Krakow Opera House, but we still recommend you give it a visit. A stone's throw from Mogilska Cowork and opposite the Botanical Garden, the Opera House is a must-see if you're in town. Here you'll find famous titles such as The Nutcracker playing alongside upcoming home-grown musical talent. You can trust them to put on a good show - after all, they've had plenty of practice since Poland's connection to opera dates back to 1628.

Like the look of these spaces? You can book into them instantly with NearU - simply download our app from the App Storeor Google Play and search, book, work. Looking for another work-ation destination in Europe? Check out our guide to Berlin.

Haven't heard of us? NearU has launched an app that connects employees to flexible desk space and meeting rooms, putting flexible working at your fingertips. Traditional office working is a thing of the past and working-from-home has a high impact on our mental health - NearU's pay-as-you-go booking platform lets you choose to work-near-home when you want, eliminating the need for a commute, expensive office rental contracts, and giving you the freedom to do what works for you.